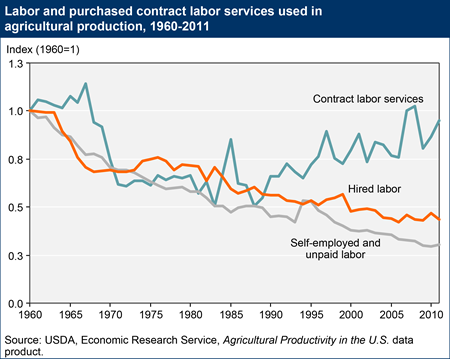 Agricultural technologies adopted over the last half-century, embodied in equipment, structures, seeds, and chemicals, allow farmers to use less labor. As a result, even though total agricultural production more than doubled between 1960 and 2011 (the latest estimates available), the amount of self-employed labor in agriculture fell by 70 percent, and the amount of hired labor fell by 60 percent. While most labor used on farms comes from the self-employed labor of farm families and hired labor (full and part-time employees), farmers also hire labor contractors to provide labor to farms, usually for specific tasks. Contract labor accounted for 1.2 percent of total costs in agriculture in 2011, compared to 13 percent for self-employed and hired labor. While the use of contract labor declined by half between 1960 and the mid-1980’s, tracking the decline in self-employed and hired labor, it has since grown as some farmers have shifted to contract labor in place of hired labor. A version of this chart is found in the ERS report, Agricultural Productivity Growth in the United States: Measurement, Trends, and Drivers, July 2015.