The WIC brand of infant formula varies by State 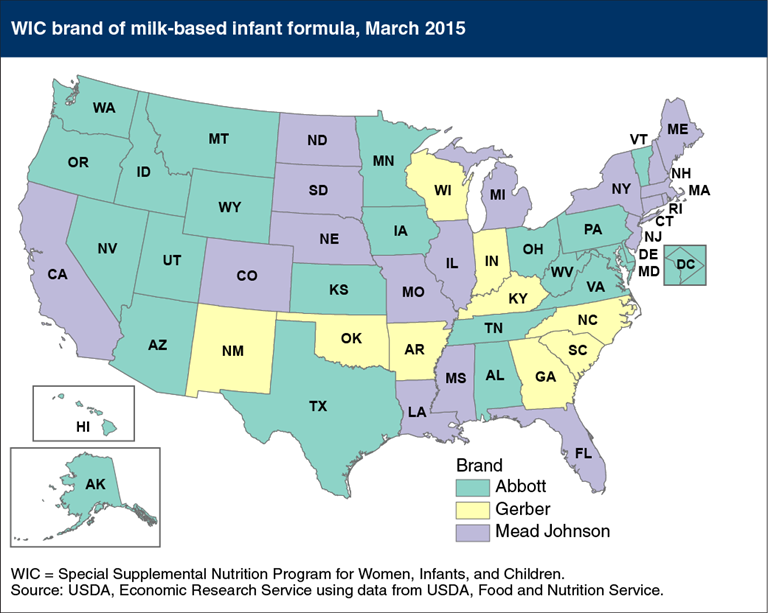 USDA’s Special Supplemental Nutrition Program for Women, Infants, and Children (WIC) provides participating infants with free infant formula. WIC is the major purchaser of infant formula in the United States; over half of all formula is purchased with WIC benefits. To reduce costs, WIC State agencies (except Mississippi and Vermont, which use a competitive solicitation process) are required to have competitively bid rebate contracts with formula manufacturers. Contracts are awarded to the manufacturer offering the lowest net price for formula (wholesale price minus the rebate). The winning manufacturer gets an exclusive contract—typically lasting about 4 years—to provide its infant formula to WIC participants in the State. In some instances, WIC State agencies have formed multi-State alliances and jointly request rebate bids. Since the mid-1990s, only three formula manufacturers—Abbott, Gerber, and Mead Johnson—have bid on WIC contracts. For contracts in effect in March 2015, Abbott was the WIC brand in 23 States and the District of Columbia, Gerber in 9 States, and Mead Johnson in 18 States. This chart updates information in the ERS report, Manufacturers’ Bids for WIC Infant Formula Rebate Contracts, 2003-2013, EIB-142, July 2015.