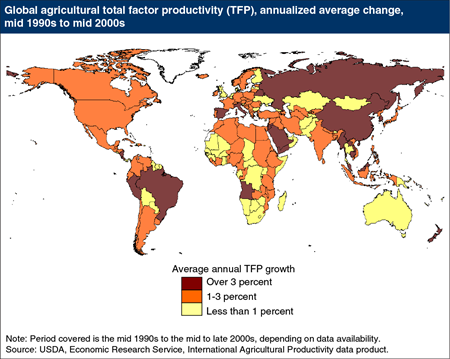 Agricultural total factor productivity (TFP) is the difference between the aggregate total output of crop/livestock commodities and the combined use of land, labor, capital and material inputs employed in farm production. Growth in TFP implies that the adoption of new technology or improved management of farm resources is increasing average productivity or efficiency of input use. Worldwide, agricultural TFP grew at an average annual rate of 1.7 percent during of 2002-11, the latest decade for which figures are available. However, not all countries are achieving growth in agricultural TFP. Among developing countries, some large countries like China and Brazil are improving their agricultural TFP rapidly, but many countries in Sub-Saharan Africa are lagging behind. Most developed countries are continuing to achieve moderate rates of agricultural TFP growth, but some, such as the UK and Australia, have experienced a slowdown in TFP growth. Maintaining growth in agricultural TFP is necessary for achieving global food security goals and could help preserve natural resources. This map is based on data from ERS’ International Agricultural Productivity accounts.