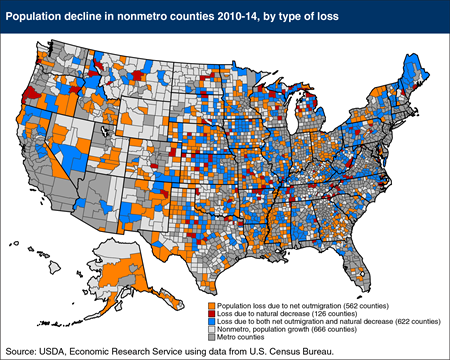 During 2010-14, the number of nonmetro counties that lost population reached a historic high of 1,310. County population loss stems from two possible sources: more people leaving a county than moving into it (net outmigration) and/or more people dying than are being born (natural decrease). Historically, the vast majority of counties that lost population still continued to experience natural increase, just not enough to offset losses from net outmigration (this scenario describes less than half of the 2010-14 population loss counties). The number of nonmetro counties with population loss from both net out-migration and natural decrease grew from 387 before the recession (2003-07) to 622 during 2010-14. Clusters of counties experiencing this demographic ‘double-jeopardy’ have expanded, especially in Alabama, southern Appalachia, along the Virginia-North Carolina border, and in New England. The rising number of double-jeopardy counties signals new challenges in maintaining future population growth and sustained economic development. This map is based on information found in the Population & Migration topic page, updated June 2015.