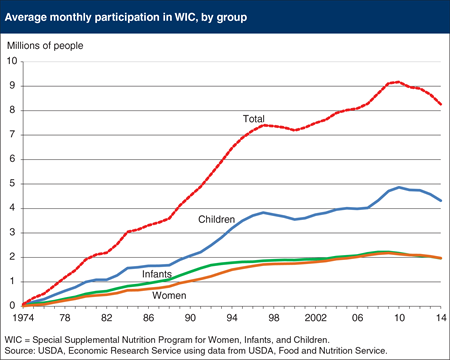 USDA’s Special Supplemental Nutrition Program for Women, Infants, and Children (WIC) provides supplemental food, nutrition education, and health care referrals to low-income, nutritionally at-risk pregnant, breastfeeding, and postpartum women as well as infants and children up to age 5. In fiscal 2014, an average 8.3 million people per month participated in the program, 5 percent fewer than the previous year. This was the largest 1-year decrease since the program’s inception in 1974. Since peaking in fiscal 2010, the number of participants has decreased by almost 10 percent. Falling WIC caseloads reflect the continued decline in the number of U.S. births, which began in 2008. In 2013 (latest data available), 3.9 million babies were born in the United States, down from 4.3 million in 2007. Fewer births reduce the potential pool of WIC-eligible participants. Improving economic conditions in recent years may have also played a role in the decline in participation. This chart appears in “WIC Experienced Largest Decrease in Participation in Program’s History in 2014” in the June 2015 issue of ERS’s Amber Waves magazine.