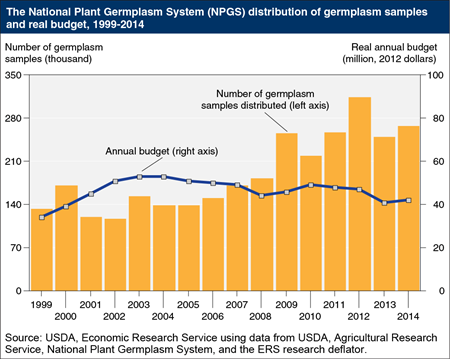 As agriculture adapts to climate change, crop genetic resources can be used to develop new plant varieties that are more tolerant of changing environmental conditions. Crop genetic resources (or germplasm) consist of seeds, plants, or plant parts that can be used in crop breeding, research, or conservation. The public sector plays an important role in collecting, conserving, and distributing crop genetic resources because private-sector incentives for crucial parts of these activities are limited. The U.S. National Plant Germplasm System (NPGS) is the primary network that manages publicly held crop germplasm in the United States. Since 2003, demand for crop genetic resources from the NPGS has increased rapidly even as the NPGS budget has declined in real dollars. By way of comparison, the NPGS budget of approximately $47 million in 2012 was well under one-half of 1 percent of the U.S. seed market (measured as the value of farmers’ purchased seed) which exceeded $20 billion for the same year. This chart updates ones found in the June 2015 Amber Waves feature, Crop Genetic Resources May Play an Increasing Role in Agricultural Adaptation to Climate Change.