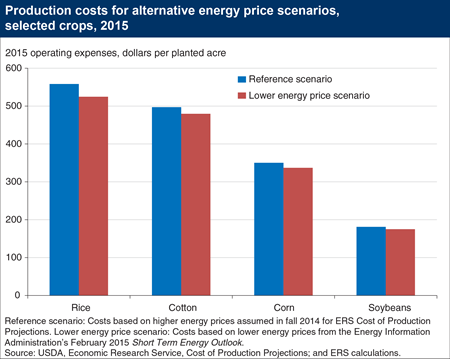 Oil and natural gas prices dropped in the latter half of 2014, with expectations that energy prices would remain lower than previously projected through 2016. Lower energy prices affect crop production expenses, which in turn influence planting decisions and commodity prices. The effect of energy prices on the cost of producing particular crops depends on the level and share of production costs for direct energy inputs such as fuel and oil, as well as for inputs such as energy-intensive nitrogen fertilizers and agricultural chemicals. Rice, cotton, and corn have high energy-related production expenses, so lower energy prices are expected to reduce operating expenses for those crops the most. Lower production costs provide an incentive to plant additional acreage, so plantings of most crops are expected to rise from what they would have been without the decline in energy prices. The exception is soybeans, whose plantings are estimated to fall initially due to relatively small production cost changes and large cross-commodity influences from corn, as they often compete with one another. Nonetheless, the estimated acreage changes due to lower energy prices are small. This chart is based on information found in Effects of Recent Energy Price Reduction on U.S. Agriculture, BIO-04, June 2015.