Food assistance expenditures fall for the first time in 15 years 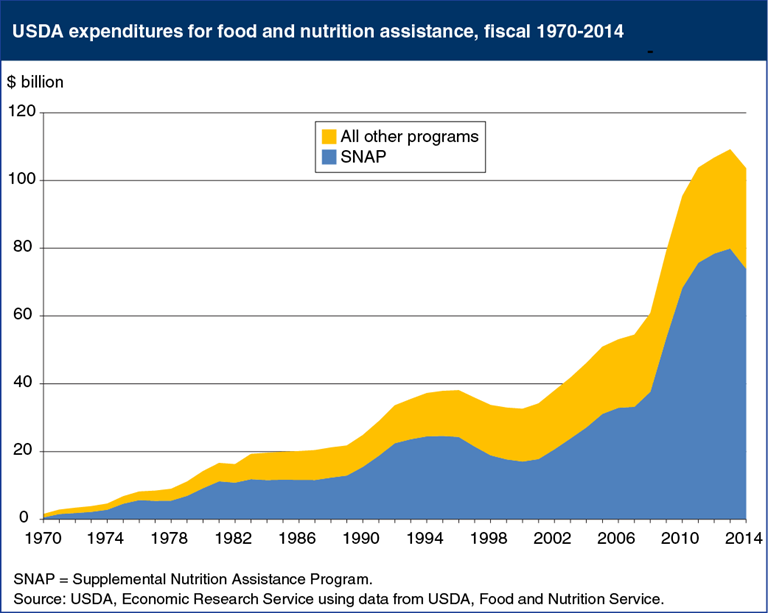 Federal expenditures for USDA’s 15 domestic food and nutrition assistance programs totaled $103.6 billion in fiscal 2014—a 5-percent drop from the previous fiscal year and the first decrease since fiscal 2000. The decrease was driven largely by an 8-percent decline in expenditures for USDA’s Supplemental Nutrition Assistance Program (SNAP), which totaled $73.9 billion in fiscal 2014. Expenditures for all the other food and nutrition assistance combined increased by less than 1 percent. Lower SNAP expenditures reflected a decrease in both participation and average benefits per person. An average 46.5 million people per month participated in the program in fiscal 2014—2 percent fewer than the previous year—as economic conditions continued to improve. Benefits per person averaged $125.37 per month, or 6 percent less than the previous fiscal year, due largely to the November 2013 termination of the temporary increase in SNAP benefits mandated by the American Recovery and Reinvestment Act of 2009. This chart appears in ERS's The Food Assistance Landscape: FY2014 Annual Report, released on March 20, 2015.