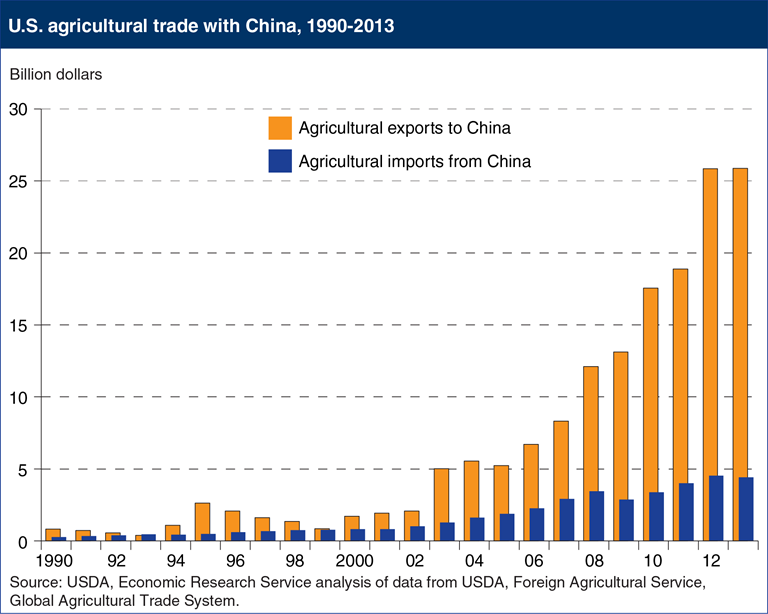 In recent years, growth in U.S.-China agricultural trade has accelerated. During calendar years 2012-13, U.S. exports of agricultural products to China averaged $25.9 billion per year—a tenfold increase from the late 1990s. Sales to China doubled during 2004-08 and doubled again during 2008-12, while the share of U.S. agricultural exports going to China rose from about 3 percent during the 1990s to 18 percent during 2012-13. China became the largest overseas market for U.S. farm products in 2010. U.S. imports of agricultural products from China rose at a slower pace, reaching $4.4 billion in 2013—agriculture is one of the few sectors where the United States has a trade surplus with China. During 2012-13, the United States accounted for over 24 percent of China’s agricultural imports by value and was its leading supplier of oilseeds, cotton, meat, cereal grains, cattle hides, distillers’ dried grains (mainly used for animal feed), and hay. Soybeans account for more than half of the total value of U.S. agricultural exports to China, averaging $14.1 billion during the 2012-13 calendar years, and are also the largest U.S. export of any type to China, accounting for about 11 percent of the value of total U.S. exports to China. This chart is based on the ERS report, China’s Growing Demand for Agricultural Imports.