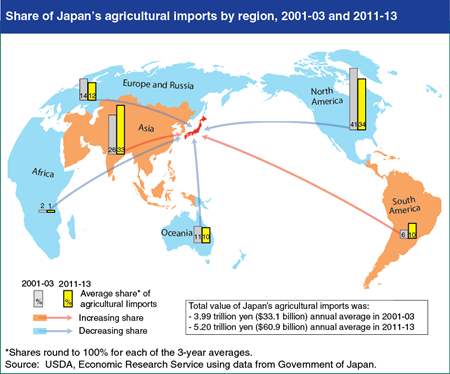 Japan is one of the largest markets for U.S. agricultural exports, and the United States has long been its largest supplier. However, in recent years the total value of U.S. agricultural exports to Japan has stagnated (in real terms) and the U.S. share of Japan’s agricultural imports has declined. U.S. exports to Japan of some major products—such as soybeans and fruits/preparations—are down since 2000, and others, such as wheat and corn, have remained flat. Japanese imports of U.S. pork are an exception, with strong growth over the last 15 years. The decline in the U.S. share of Japan’s agricultural imports reflects greater competition from competing suppliers, especially in South America and Asia. Japan has expanded its imports of soybeans, soy meal, poultry meat, and grains from South America; palm oil, rubber, and poultry meat from Southeast Asia; soy meal from South Asia; and alcoholic beverages and processed foods from nearby South Korea. Nevertheless, the United States remains Japan’s largest supplier of agricultural products despite trade policies there that maintain a high level of protection for domestically produced products such as wheat and rice and many consumer-ready foods. This chart is from “Japan, Vietnam, and the Asian Model of Agricultural Development and Trade,” in Amber Waves, February 2015.