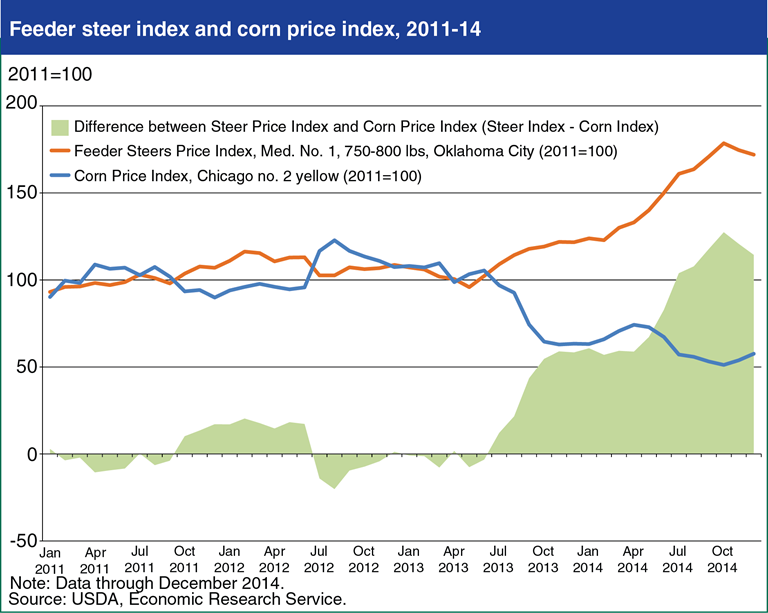 Strong feeder cattle prices and declining feed costs are supporting high returns for cow-calf producers. The price of 750-800 lb. feeder steers at the Oklahoma National Stockyards exceeded $220 per hundredweight at the end of 2014, up $65 since January and over $100 since May 2013. At the same time, the price of corn (a major component of cattle feed) fell from above $7.00 per bushel in mid-2013 to under $4.00 per bushel by December 2014, reflecting a record 2014 crop projected at 14.4 billion bushels. Despite weaker demand, beef prices are at record high levels due to tight supplies and historically low cattle inventories. Expanding the cattle herd is a long-term process due to the time it takes cattle to mature, and requires holding some heifers off market for breeding purposes. Recently released data from USDA’s Cattle report suggests that inventories are beginning to grow, and cattle prices have begun to retreat. With corn prices forecast by USDA to average around $3.50 per bushel for the 2014/15 marketing year, returns to cow-calf operators should remain favorable into 2015. This chart is based on data from ERS’s Livestock & Meat Domestic Data and Feed Grains Database.