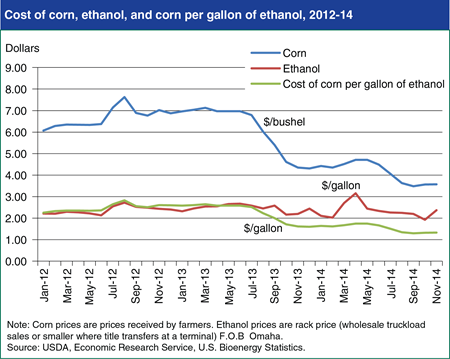 Reflecting growing supplies, corn prices have been trending lower since reaching a record high season average farm price of $6.89 per bushel for the 2012/13 marketing year (September/August). Monthly average corn prices fell sharply between July 2013 and January 2014, and then declined further through 2014, reflecting a record 2014 corn crop, projected at 14.4 billion bushels. Corn prices in 2014/15 are projected at $3.50 per bushel, down 50 percent since the summer of 2013. However, throughout this period ethanol prices have remained relatively steady, averaging $2.41 per gallon. Corn is the leading feedstock for ethanol production in the United States, and ethanol represents about 40 percent of total corn use. With the price of corn declining and ethanol prices steady, ethanol producer margins have strengthened over the past 18 months. Higher margins would typically encourage greater production, but with domestic use limited to the 10 percent ethanol blend already used in most gasoline, the market can only expand through increased gasoline use or higher exports. This chart is based on data found in the U.S. Bioenergy Statistics database.