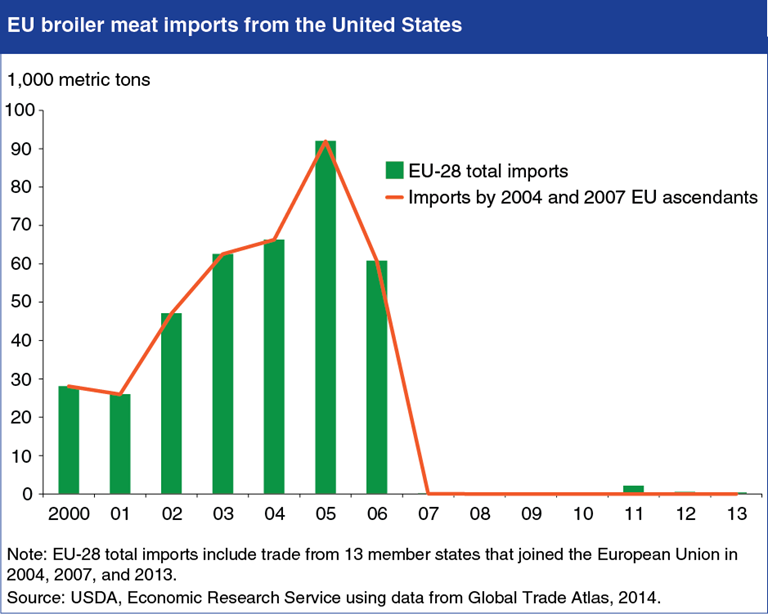 The European Union (EU) is one of the world’s leading producers, consumers, and traders of broiler (young chicken) meat, but its sanitary and phytosanitary policies limit imports of U.S. broiler meat. All broiler meat imported by the EU is required to be from sources that do not use pathogen reduction treatments (PRTs), such as chlorine wash, in their production. PRTs are approved for use in the United States and are used by virtually all U.S. processors. Because of this restriction, even the 13 most recent EU member states—including Romania, Latvia, Estonia, Poland, and Bulgaria—halted their imports of U.S. broiler meat after they joined the EU in 2004 and 2007. U.S. broiler exports to the EU are also potentially restricted by the EU’s system of tariff rate quotas (TRQs), but the United States does not currently fill its existing quota because of the EU PRT restriction. The United States receives an exclusive TRQ of 16,665 metric tons, which can be applied to fresh and frozen broiler and turkey meat in whole-bird or parts form. The EU imported 670,000 metric tons of broiler meat in 2013, with 93 percent of those imports supplied by Brazil and Thailand. Find this chart and additional analysis in Sanitary and Phytosanitary Measures and Tariff-Rate Quotas for U.S. Meat Exports to the European Union.