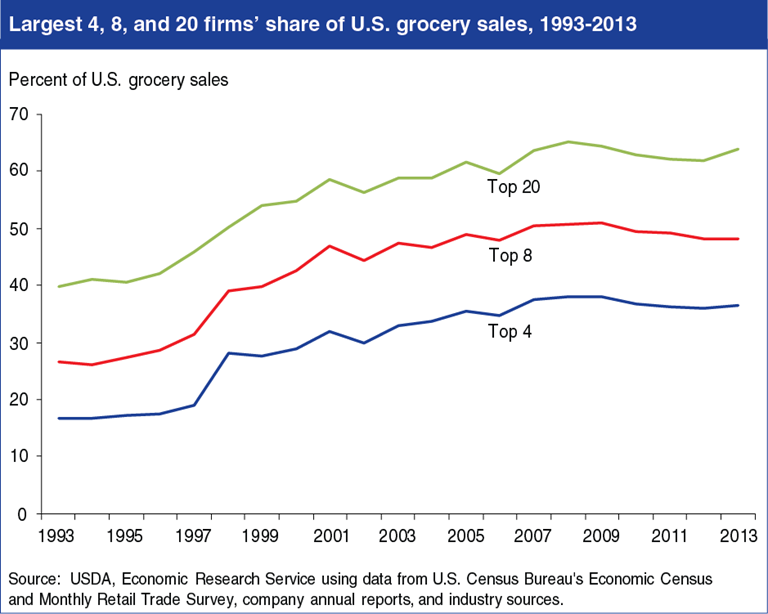 Sales of food and nonfood grocery products by the 20 largest U.S. grocery retailers accounted for 63.8 percent of the $703.9 billion in total 2013 U.S. grocery sales. 2013 marked the first increase in sales share for the top 20 grocery retailers since 2008, when their share stood at 65.1 percent. The 4 largest grocery retailers—Wal-Mart Supercenters, Kroger, Safeway, and Publix Super Markets—accounted for 36.4 percent of total grocery sales in 2013, a 1.7-percentage point drop since 2008. Wal-Mart Supercenters maintained their number one spot, with grocery sales that were 53 percent higher than second-place Kroger. Kroger’s 2013 acquisition of Harris Teeter and the pending 2014 sale of Safeway to Albertson’s—along with the continued sales growth of supercenters such as Wal-Mart and Target—are likely to increase the sales shares of the largest U.S. grocery retailers during the next few years. This chart appears in “Slow Sales Growth and Increased Company Acquisitions Impact U.S. Food Retailing” in the November 2014 issue of ERS’s Amber Waves magazine.