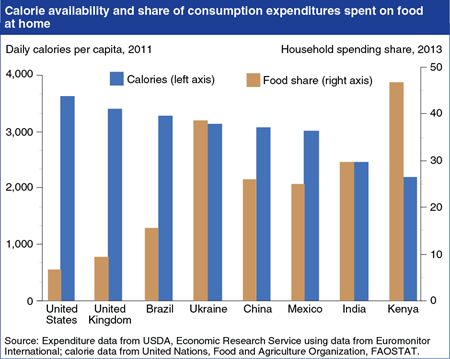 Celebrated on October 16, World Food Day provides an opportunity to raise awareness of the worldwide problems of poverty and hunger. Countries vary in how much their citizens spend on food at home as a share of consumption expenditures. Consumption expenditures include all household spending, but not savings. High-income countries such as the United States and the United Kingdom have higher food spending in absolute terms, but their food spending share is low. These two countries spent less than 10 percent of their consumption expenditures on food purchased from supermarkets and other food stores in 2013, while the share approached 50 percent in low-income countries such as Kenya. Per capita calorie availability follows the reverse pattern. In 2011, U.S. per capita calorie availability was 3,639 calories per day, while Kenya’s was 2,189 calories—more than one-third less. Middle-income countries such as Brazil and China surpassed daily calorie availability of 3,000 calories per person with a 16-percent share of consumption expenditures for food at home in Brazil and 26 percent in China. The data for this chart come from ERS’s Food Expenditures data product, updated on October 1, 2014, complemented with data from United Nations, Food and Agriculture Organization, FAOSTAT.