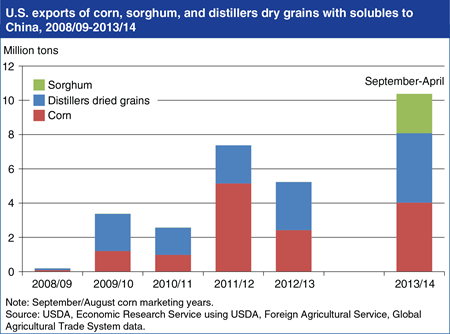 With record shipments so far in 2013/14 (September/August marketing year), China has emerged as a major buyer of U.S. feed grains, but this trade is now being disrupted by China’s rejection of U.S. shipments containing unapproved genetically modified (GM) material. U.S. corn exports to China have reached 4.0 million tons so far in 2013/14 and China has also, for the first time, initiated large-scale imports of U.S. sorghum, with imports of 2.3 million tons in the first 7 months of 2013/14. China has become the largest U.S. export market for distillers dry grains with solubles (DDGS, a byproduct from production of corn-based ethanol) with sales to China of 2.8 million tons in 2012/13 and 4.0 million tons so far in 2013/14. Feed sales to China are being driven by the continued expansion of meat and feed consumption, high Chinese corn prices, and demand by animal product producers for cost-efficient feed ingredients. Until recently, China’s trade policies have helped channel demand toward DDGS and sorghum, which face relatively low tariffs and—unlike corn—are not subject to import quotas. But, so far in 2013/14, China has rejected about 1.1 million tons of U.S. corn and DDGS containing unapproved GM material, specifically the MIR 162 strain, and other shipments have been cancelled or diverted to other destinations. More recently, China has halted issuance of licenses for imports of any U.S. DDGS. These developments place prospects for U.S feed grain exports to China in 2013/14 and beyond in question. For further analysis, see China’s Market for Distillers Dried Grains and the Key Influences on Its Longer Run Potential.