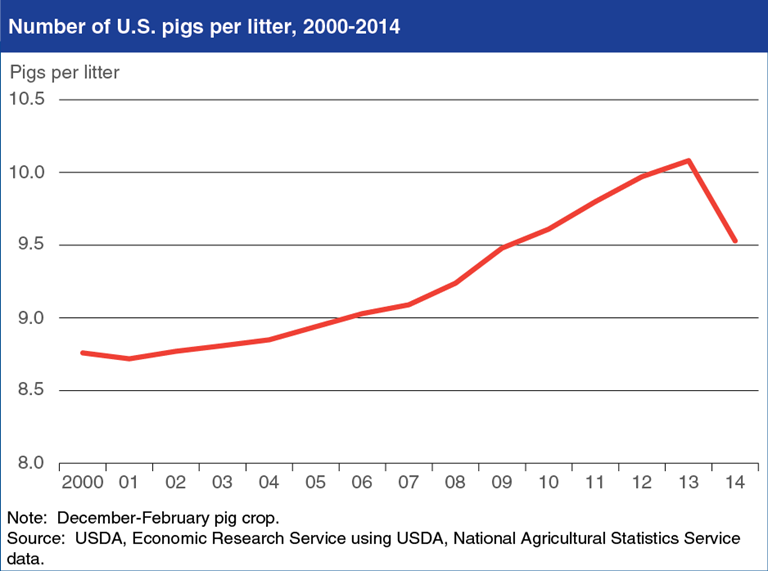 The spread of the Porcine Epidemic Diarrhea virus (PEDv) in the U.S. hog sector since the fall of 2013 has contributed to reduced market hog inventories and higher hog prices in early 2014 and forecasts for lower pork production and higher prices later in the year. PEDv is a coronavirus particularly lethal to pre-weaned piglets. The first U.S. case was formally diagnosed in May 2013 and, according to the American Association of Swine Veterinarians, the disease continued to spread through the fall of 2013, and the number of new cases accelerated early in 2014. The potential effects of PEDv on pork production are first signaled by USDA survey estimates of pigs per litter. Because of the high mortality rate of very young piglets from PEDv, the latest report showed a lower average pigs-per-litter estimate for the December 2013-February 2014 pig crop. As a result, the forecast for the December-February 2014 pig crop is down 2.8 percent compared with 2013, leading to lower expected pork supplies in the summer of 2014. The North American pork industry is fighting the disease through enhanced biosecurity measures, supportive care of affected piglets, and controlled exposure of healthy animals to the disease to help them develop protective immunity. Find additional analysis in Livestock, Dairy, and Poultry Outlook: May 2014.