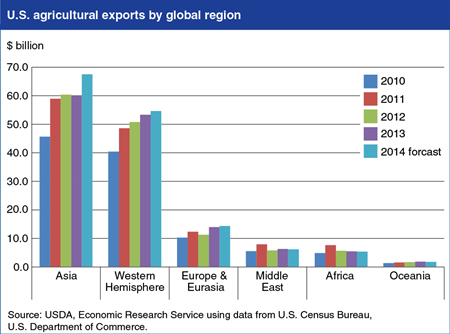 U.S. agricultural exports are forecast at a record $149.5 billion in fiscal 2014 (year ending September 30), $8.6 billion above 2013, with exports to Asian and Western Hemisphere countries accounting for most of the growth. China is forecast to remain the largest U.S. market, with U.S. sales expected to rise from $23.5 billion in fiscal 2013 to $28 billion in fiscal 2014. Other Asian markets forecast to show significant growth include Hong Kong, Indonesia, the Philippines, Malaysia, and Thailand. In the Western Hemisphere, exports to Canada (the second largest U.S. market) are expected to rise marginally to $21.6 billion, while exports to Mexico (the third largest) are forecast to rise to $18.6 billion. U.S. export growth is also forecast for South America, including Brazil, Colombia, and Peru. Higher income growth and a lower U.S. exchange rate are expected to support continued growth in U.S. exports, especially within the Western Hemisphere. Although slower income growth is anticipated for China in 2014, demand for agricultural goods is expected to remain robust. This chart is based on data found in the Outlook for U.S. Agricultural Trade.