Difference in availability of USDA school lunches and breakfasts narrows 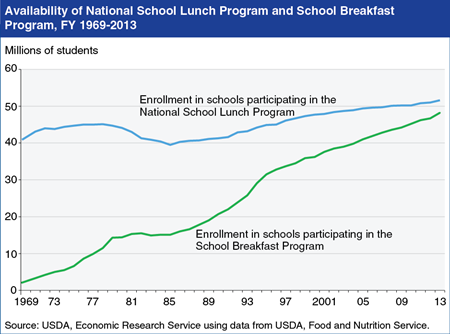 USDA’s National School Lunch Program (NSLP) was established in 1946 and has been available in nearly all public schools and many private schools since the 1970s. In fiscal 2013, about 52 million children attended schools where NSLP lunches were offered to students and 59 percent of children enrolled in those schools participated in the program. USDA’s School Breakfast Program (SBP) is a newer program—the SBP was not granted permanent authorization until 1975. As SBP funding increased and grants to schools to help start up the program became more available, the number of schools offering the program steadily grew. By fiscal 2013, 94 percent of the students who had access to the NSLP also had access to the SBP (48 million school children). However, only 27 percent of children enrolled in schools offering the SBP participated in that program in fiscal 2013. This chart appears in ERS’s The Food Assistance Landscape: FY 2013 Annual Report.