On average, rural veterans are older than nonveterans 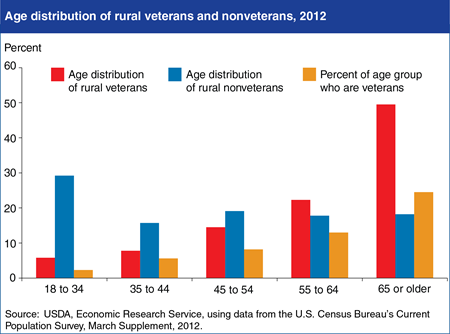 Nearly 4 million veterans reside in rural America (defined here as residents of nonmetropolitan counties). Rural veterans are an aging and increasingly diverse group of men and women who comprise nearly 11 percent of the rural adult population, although their numbers are consistently declining. The share of rural veterans differs by age, ranging from less than 3 percent of 18- to 34-year-olds up to 25 percent of those aged 65 and older. The age distribution of rural veterans tends to be older than nonveterans; nearly half of rural veterans were age 65 or older in 2012, compared with only 18 percent of rural nonveterans. The aging of the rural veteran population is largely due to the fact that a smaller share of the population now serves in the military than in the past. For instance, nearly 20 percent of American men served in the military during World War II, compared to less than 1 percent today. This chart comes from Rural Veterans at a Glance, EB-25, November 2013.