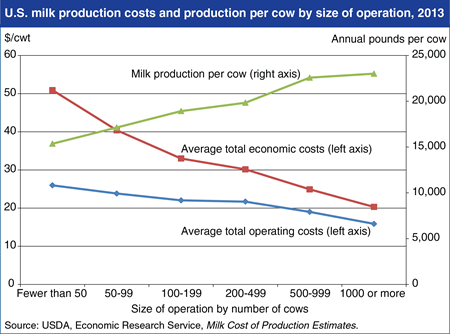 Costs of production for U.S. milk decline as the size of the dairy operation (measured by the number of cows) increases. Based on 2013 data, average total economic costs of milk production—a measure that includes the opportunity costs of land, labor, and other owned resources—fell by nearly 60 percent, from an average of about $50 per hundredweight (cwt) for producers with fewer than 50 cows to about $20 per cwt for those with 1,000 cows or more. Average costs are lower on larger farms because fixed cost items, such as management, land, and other resource costs, are spread across a larger number of cows, and because average output per cow increases along with farm size. Mean output per cow was just over 15,000 pounds among operations with less than 50 cows, while operations with 1,000 or more head averaged more than 23,000 pounds per cow. Higher milk yields on larger farms stem from factors such as better breeding, nutrition, and health management, as well as the ability to access competitively priced supplies of high quality feed inputs. This chart is based on data found in Milk Cost of Production Estimates.