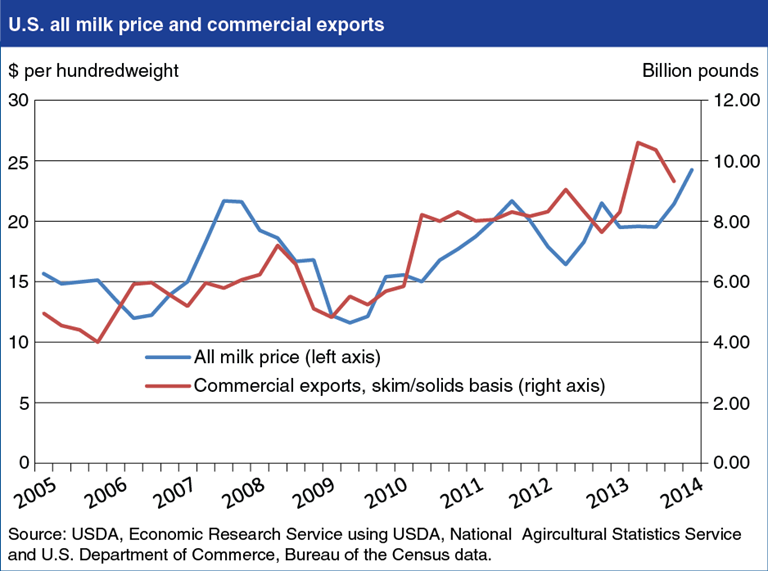 U.S. milk and dairy product prices have reached record levels in nominal terms and are expected to remain high for the remainder of 2014 because of strong foreign and domestic demand. While U.S. domestic demand has strengthened along with the economic recovery, expanding export demand for U.S. milk powder, cheese, and butter is having an increasing influence on the U.S market. The U.S. domestic price for fluid milk—represented by the “All milk” price—is closely linked to dairy product prices, and dairy product exports have risen from 10.9 percent of total U.S. milk production in 2005 (on a skims-solid basis) to 19.2 percent in 2013. Export impacts on U.S. prices vary with the composition of exports, reflected in differences between exports evaluated on a “skims/solids” or “fats” basis. In 2012 and 2013, relatively small “fats basis” exports reduced the impacts on U.S. all-milk prices in some quarters. For January and February of 2014, cheese exports are up 39 percent year-over-year, while milk powder exports are up 12 percent and butter/butterfat exports are up 91 percent. Major export destinations for U.S. dairy products are Mexico and South Korea for cheese and North Africa and the Middle East for butter/butterfat. Despite a year-on-year decline so far in 2014, Mexico remains the largest destination for U.S. milk powder exports; Southeast Asia and China are also major export markets. This chart is based on data found in Dairy Data, with analysis in the Livestock, Dairy, and Poultry Outlook: April 2014.