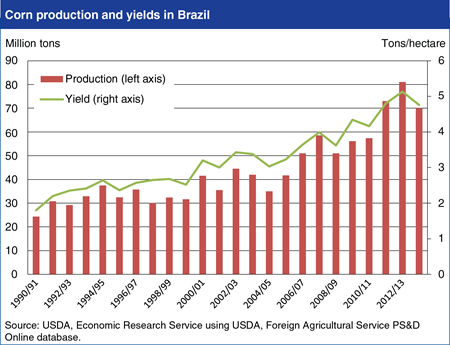 Rising yields have been the primary driver of growth in Brazil’s corn production since the mid-2000s. Production gains have allowed Brazil to meet rising domestic corn demand, as well as emerge as a major corn exporter. New high-yielding varieties, the introduction of GMO corn, improved cultural practices, and a shift to higher-yielding land has supported long-term yield growth. A large share of second-crop corn is planted following soybeans in the frontier agricultural State of Mato Grosso, where corn production quadrupled over the past decade. In 2011/12 and 2012/13 (March/February marketing year), above-average rains in Mato Grosso pushed corn yields and production to record levels. For 2013/14, lower corn prices caused reductions in corn area and, with the assumption of more normal weather, corn yields are forecast below the 2012/13 record. Brazil is the world’s third largest corn producer after the United States and China. Brazil became the world’s largest corn exporter in 2012/13 when the U.S. corn crop was damaged by drought, but is forecast to be the second largest exporter in in 2013/14. Find additional analysis of corn market developments in Feed Outlook: March 2014.