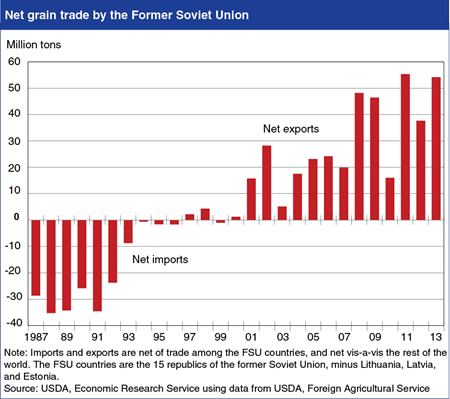 Since the breakup of the former Soviet Union (FSU) in the early 1990s, the region has transitioned from major grain importer to major grain exporter, with important implications for global markets. The region was a large importer of grains—primarily wheat and corn—during the last decade of the FSU, with net imports in some years exceeding 30 million tons. Grain imports largely ceased during the 1990s, but the region emerged as a grain exporter beginning in 2001. Although FSU grain production and exports can vary significantly due to weather conditions, net exports have exceeded 50 million tons in some recent years, representing a swing of roughly 80 million tons of grain available on the world market compared with the 1980s. The vast bulk of the FSU exports are wheat, barley, and corn from the three main agricultural countries of the region – Russia, Ukraine, and Kazakhstan. The trade turnaround has occurred for two main reasons, the first being the contraction of the region’s livestock sector by about half during the 1990s following withdrawal of subsidies under the Soviet system, reducing the need for large imports of animal feed. The second factor is significant gains in grain yields and production during the 2000s, which has created surpluses for export. For more information, see Rising Grain Exports by the Former Soviet Union Region.