Many Federal food assistance programs rooted in the War on Poverty 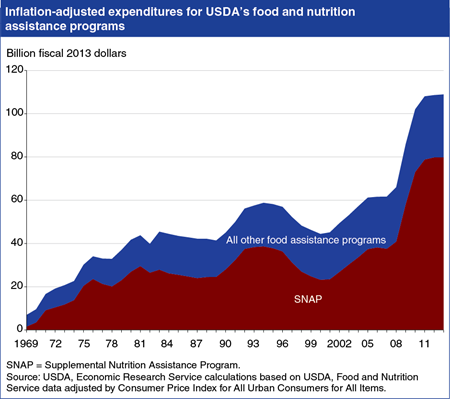 In his 1964 State of the Union address, President Lyndon B. Johnson declared “unconditional war on poverty in America” in response to large numbers of Americans “with incomes too small to even meet their basic needs.” Many of USDA’s food and nutrition assistance programs were designed to address one of these basic needs —food—and are legacies of the War on Poverty. In the decades following President Johnson’s declaration, total food and nutrition assistance expenditures have fluctuated with changing economic conditions that affect the number of eligible people, their rate of participation, and benefit levels. However, the programs have generally expanded as the U.S. population has grown and coverage of the target population has increased. USDA’s Supplemental Nutrition Assistance Program (SNAP, formerly the Food Stamp Program) and the five other programs that originated in the era of the War on Poverty accounted for 86 percent of the $109 billion spent by USDA on food and nutrition assistance in fiscal year 2013. This chart appears in “USDA’s Food Assistance Programs: Legacies of the War on Poverty” in the February 2014 issue of ERS’s Amber Waves magazine.