Growth in agricultural output has slowed since 2000 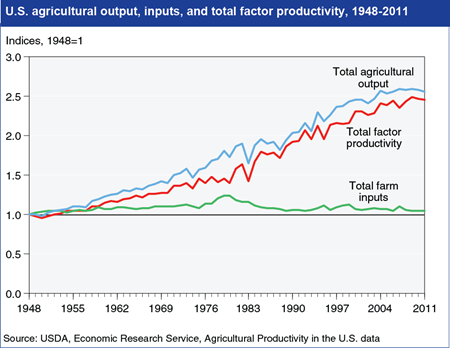 The level of U.S. farm output more than doubled between 1948 and 2011, growing at an average annual rate of 1.49 percent. Aggregate input use increased at a modest 0.07 percent annually over this period, so growth in farm sector output was almost entirely due to an increase in productivity (as measured by total factor productivity, or TFP, growth). Growth in output has not been constant—it slowed to an average annual rate of 0.78 percent during 2000-07 and was negative between 2007 and 2011, reflecting adverse growing conditions. Measured productivity growth slowed as well, averaging 0.31 percent per annum during 2000-07, but still accounted for 40 percent of the growth in output over this period. TFP growth rebounded somewhat between 2007 and 2011, as aggregate input use dropped faster than agricultural output. This chart is found in the ERS data product Agricultural Productivity in the U.S., on the ERS website, updated September 2013.