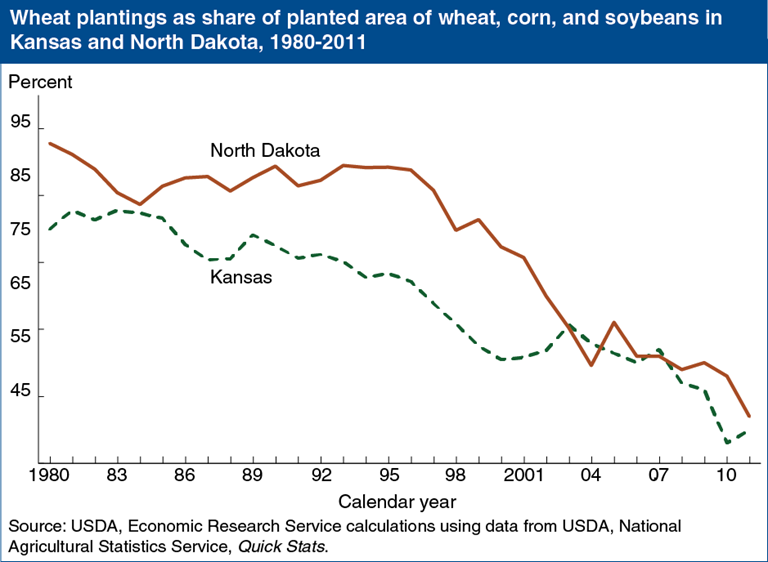 Although the United States remains a major wheat producer, ranking fourth globally after China, the European Union, and India, U.S. wheat area has generally declined since the mid-1980s, in part due to changes in policies and technology that have altered incentives for wheat cultivation. Recent trends are exemplified by developments in two of the largest wheat-producing states: Kansas and North Dakota. The 1996 Farm Act introduced full planting flexibility, enabling farmers to switch to alternative crops without penalties and increasing competition with corn and oilseeds which were more profitable than wheat. Technology changes include new practices that reduce wheat’s frequency in crop rotations, including increased use of water-conserving reduced-till and no-till farming that has enhanced the yields and profitability of crops such as corn and soybeans. Wheat acreage has also been affected by new, genetically modified varieties of corn and soybeans that can be planted farther west and north in areas with drier conditions or shorter growing seasons, and by new herbicide-resistant varieties of corn and soybeans that afford easier weed control. In contrast, the pace of varietal improvement has been slower for wheat, resulting in little growth in wheat yields and reducing its value as a cropping option. In Kansas and North Dakota, wheat accounted for 80-90 percent of the total area of wheat, corn, and soybeans planted in the 1980s but, in recent years, wheat’s share has dropped to 50-52 percent. This chart can be found in U.S. Wheat Production Practices, Costs, and Yields: Variations Across Regions, EIB-116.