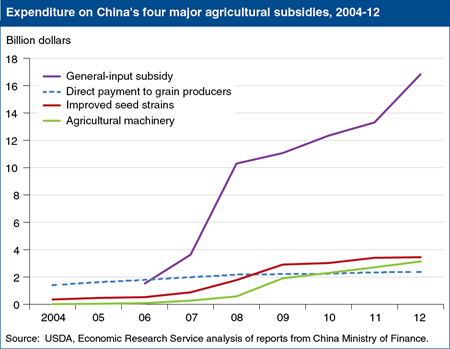 China’s expansion of agricultural support is driven by a mix of factors, including a campaign to “modernize” agriculture by inducing adoption of modern inputs and increased investment, concerns about rural-urban income inequality, and concerns about maintaining “food security.” Growth in subsidy payments reflects the strategy of increasing subsidies annually. Most of the growth in payments is in the “general-input subsidy” that aims to offset rising production costs in order to maintain net returns to grain producers. From 2004 to 2012, the direct payment to grain producers grew marginally. During the same period, the improved-seed subsidy increased tenfold to $3.4 billion by adding more crops and extending the geographic coverage of the program. The machinery-purchase subsidy was increased by an even greater margin, reaching $3.1 billion in 2012. However, increase in expenditure on the general-input subsidy exceeded the combined growth of these other subsidies and it was the dominant type of direct-subsidy expenditure in 2012. Central Government policies describe a “dynamic adjustment mechanism” indicating that the general-input subsidy is determined by increases in prices of grain, fertilizer, fuel, and other inputs to keep net returns to grain producers from falling. This chart can be found in Growth and Evolution in China’s Agricultural Support Policies, ERR-153.