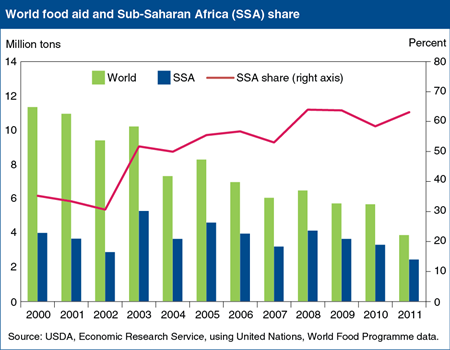 The volume of world food aid has generally declined since 2000, falling from an average of 10.6 million tons annually during 2000-02 to 5.1 million tons during 2009-11. In 2011, according to data from the United Nations’ World Food Programme, world food aid dipped below 4 million tons, the lowest since 2000. Since 2000, the share of world food aid shipped to Sub-Saharan Africa has increased, rising from about 35 percent in the early 2000s to more than 60 percent in recent years. In 2011, however, food aid to Sub-Saharan Africa reached a low of 2.5 million tons, after ranging between about 3 and 5 million tons annually during 2000-10. According to ERS’s International Food Security Assessment, 2013-2023, Sub-Saharan Africa remains the most food insecure region in the world. Key factors are inability to sustain gains in production ahead of relatively high rates of population growth and limited capacity to import food commercially. This chart is adapted from one that can be found in International Food Security Assessment, 2013-2023.