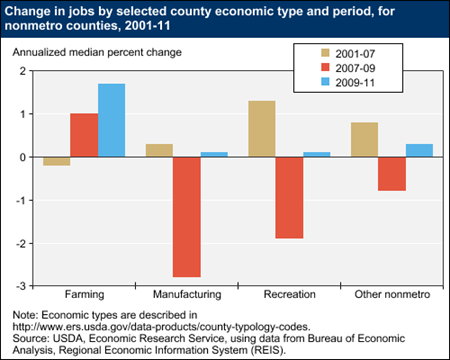 All sectors of the economy were not equally affected by the 2007-09 economic recession and the subsequent recovery. Specialization within local economies has shaped county-to-county differences in recent rural (nonmetro) growth in jobs. Boosted by high farm income and, in some areas, booming gas-extraction activities, farming-dependent counties have seen job growth for the first time in many years, growing during and after the recession. Manufacturing counties, affected by global competition, showed weak job growth in the early 2000s, followed by substantial losses during the recession. Recreation counties, which experienced above-average job growth in 2001-07, lost jobs in 2007-09 as their housing markets collapsed and the recession reduced tourism. Weak postrecession job growth did not bring jobs back to prerecession levels in most nonmetro counties by 2011. County economic types were defined by ERS in 2004 and are scheduled to be updated next year. This chart combines the ERS county typology codes with employment data from U.S. Department of Commerce, Bureau of Economic Analysis.