In regions with less cropland, lagoon use increases among hog operations 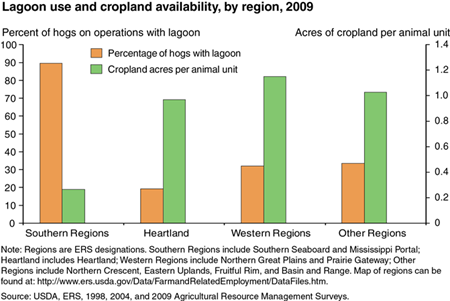 Geographical shifts in hog production have accompanied structural and organizational changes in the industry. Historically, hog production was concentrated in the Heartland, particularly in Iowa and Illinois, where an abundant corn supply provided a cheap source of hog feed and sufficient acreage on which to spread hog manure. During the 1980s and 1990s, hog production grew dramatically in the Southeast, especially in North Carolina, driven mainly by the growth of large contract operations. Growth in the Southeast has posed the challenge of managing an increasing volume of hog manure in areas with a denser population and much less crop acreage for manure application than in the Heartland. In 2009, hog operations had about a quarter-acre of cropland per animal unit in the Southern regions compared with about 1 acre per animal unit in other regions. Most hog producers in the Southeast treat and store manure in lagoon systems and apply manure to farm acreage with an irrigation system, which allows producers to apply hog manure on less acreage than other manure management systems. This chart is found in Trends and Developments in Hog Manure Management: 1998-2009, EIB-81, September 2011.