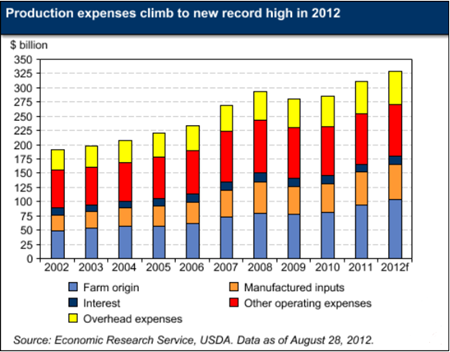 Total production expenses are currently forecast to rise $18.6 billion (6.0 percent) in 2012, following an 8.9-percent increase in 2011 and continuing a string of large year-to-year movements that have taken place since 2002. Farm-origin expenses and manufactured inputs have increased 116 percent since 2002, accounting for nearly 75 percent of the change in total production expenses during the period. The widespread drought is expected to affect production expenses principally through its impact on livestock feed. Most crops were already planted before the severity of the drought was established so only harvest-related expenses will be affected. Among livestock-related expenses, the price of feed is increasing--following a 20-percent jump in 2011 feed expenses are expected to rise another 13 percent in 2012. This chart is from the Farm Sector Income & Finances topic page on the ERS website.