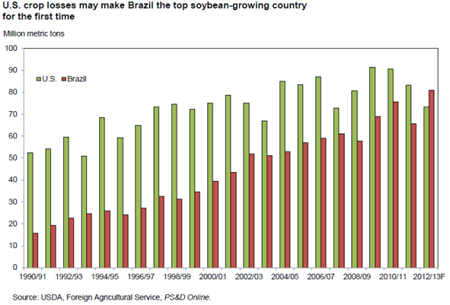 Despite a large decline in the U.S. crop, global soybean production in 2012/13 is expected to increase to 260.5 million metric tons from 236 million in 2011/12 based on large gains in South America. By July, soybean prices in Brazil had surged nearly 50 percent compared to a year earlier. Brazilian producers are expected to respond to these incentives with a 10-percent increase in soybean area for 2012/13 to 27.5 million hectares. A larger cropland base is projected to raise Brazil's soybean production to 81 million tons—up 3 million from July's forecast. If realized, Brazil's 2012/13 soybean crop would be the first ever to surpass the U.S. harvest. A Brazilian soybean crop of this magnitude could push the country's 2012/13 exports to a world-leading 37.6 million tons. This chart is found in the August 2012 Oil Crops Outlook, OCS-12h.