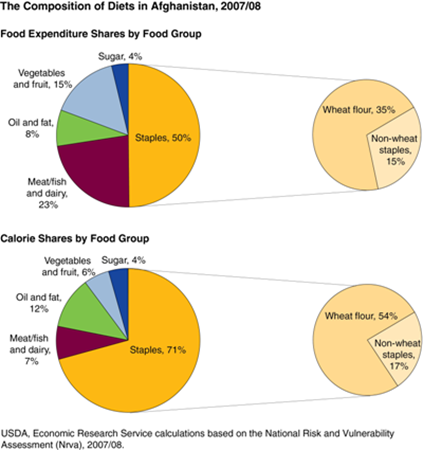 Increases in the prices of staple foods can have serious effects for households living at or near subsistence levels. Over the past few years, increases in global food prices have led to an erosion of purchasing power in many developing countries, where the poor often spend the majority of their budgets on food. Staple foods make up 50 percent of household food expenditures and 71 percent of daily calorie intake in Afghanistan. Wheat flour, which doubled in price between December 2007 and July 2008, is the primary staple food in Afghanistan; it alone accounts for 54 percent of daily calories per capita and 35 percent of household food expenditures. The differences in the calorie and expenditure shares reflect price differences between food groups. The cheapest foods--in terms of calories per Afghani (the local currency)--are grains and pulses. For 1 Afghani (approximately 2 cents), a household can purchase approximately 184 calories of wheat flour, 106 calories of lentils, or 78 calories of rice. In contrast, meat and vegetables are the most expensive; one Afghani purchases only 9 calories of beef or 10 calories of cucumber. These charts are found in the ERS report, International Food Security Assessment, 2012-22, GFA-23, July 2012. Additional information can also be found in "Rising Food Prices and Declining Food Security: Evidence From Afghanistan" in Amber Waves, September 2011.