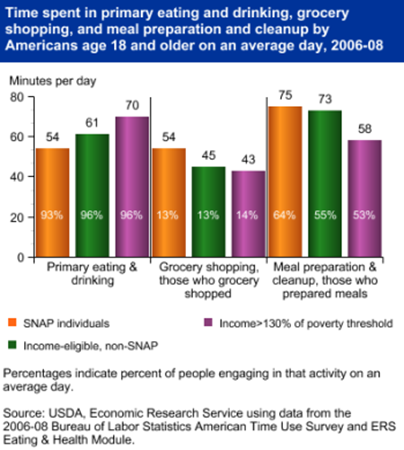 On an average day during 2006-08, Americans age 18 and older participating in USDA's Supplemental Nutrition Assistance Program (SNAP) spent 54 minutes in primary eating and drinking, that is, eating and drinking as a main activity. Those who were income-eligible but not receiving SNAP benefits spent 61 minutes in primary eating and drinking, and those with higher incomes spent 70 minutes. About 14 percent of the population shops for groceries on an average day. Of those who shopped on the survey day, SNAP individuals spent an average of 54 minutes shopping--more time than the other two groups. Sixty-four percent of SNAP individuals engaged in meal preparation and cleanup on an average day, spending 75 minutes on this task compared to 58 minutes by higher-income individuals. This longer grocery shopping and meal prep time may be because SNAP individuals spend a larger share of their meal time at home, and they may stretch their food dollars by cooking more dishes from scratch. The data for this chart come from How Much Time Do Americans Spend on Food?, EIB-86, November 2011.