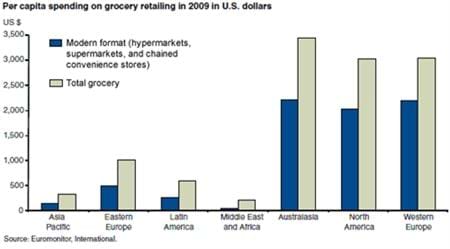 Though modern formats-hypermarkets, supermarkets, and chained convenience stores-are proliferating in developing countries, the developed world continues to have the largest per capita market for both total grocery expenditures and total grocery sales in modern formats. Per capita expenditures in North America (excluding Mexico), Western Europe, and Australasia (Australia and New Zealand) dwarfed those of other regions in 2009; grocery expenditures were at least 3 times larger than in Eastern Europe and over 10 times larger than in Asia, the Middle East, and Africa. These regional differences widen for the share of grocery expenditures in modern formats. This graph comes from the ERS report, The Expansion of Modern Grocery Retailing and Trade in Developing Countries, ERR-122, July 2011.