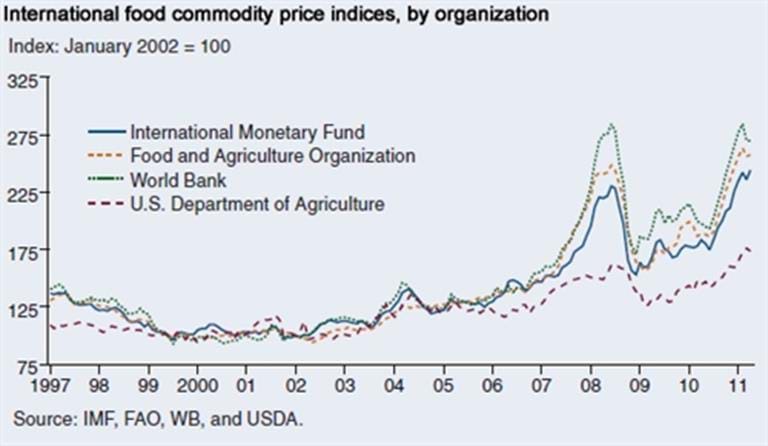 cAt least four organizations publish a monthly index of food commodity prices: the International Monetary Fund (IMF), the United Nation's Food and Agriculture Organization (FAO), the World Bank (WB), and the U.S. Department of Agriculture's National Agriculture Statistics Service (NASS). Each organization's index is based on a slightly different set of commodities and pricing points, as well as on different weights for each individual commodity's contribution to the overall index. All four indices, however, exhibit similar patterns as prices rise and fall. The FAO's index for December 2010 was higher than its previous high point in June of 2008. None of the other three organizations' December 2010 indices surpassed their previous record, primarily because the FAO index has higher weights for sugar and vegetable oils, commodities whose prices increased the most. The IMF index uses relatively higher weights for food grains. By January 2011, all of the indices had set a new record high, surpassing their June 2008 records. This chart was published June 2011 in the ERS report, Why Have Food Commodity Prices Risen Again?, WRS-1103.