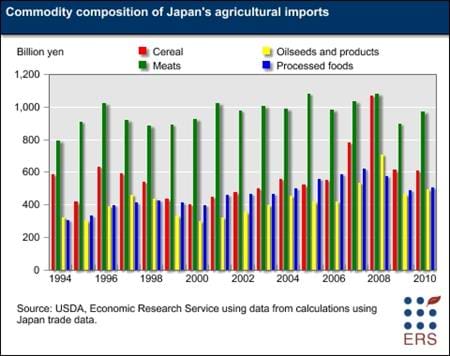 Meats are the largest component of Japan's agricultural imports-about 20 percent in recent years. Based on the value of imports, Japan is the largest meat-importing country in the world, purchasing large quantities of pork, beef, and poultry meat. Japan is also the world's largest corn importer, and a major importer of wheat. High global prices caused the value of cereal imports to spike in 2007 and 2008, almost equaling meat imports in 2008. Japan's oilseed-related imports remain important, but their composition is changing, as soymeal and palm oil imports rise and soybean imports for crushing decline. Processed food imports (here grain-based, fruit- and vegetable-based, and highly processed foods) have declined in recent years as the value of the yen has risen, allowing Japan to buy the same amount of food for fewer yen. This chart appeared in the ERS briefing room on Japan, March 2011.