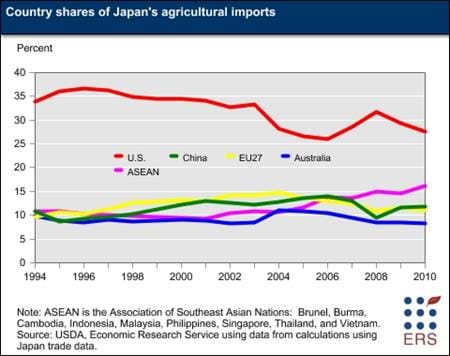 Japan's agricultural imports (about $50 billion in 2010) make it the world's third-largest importer, after the United States and the European Union (EU). Based on total calories consumed, Japan imports about 60 percent of its food each year, and it is also a major importer of other agricultural products, such as rubber. Imports from the United States (almost $14 billion, including shipping costs, in 2010) represent over one-fourth of Japan's total agricultural imports. Major imports from the United States include pork, corn, wheat, soybeans, and beef. Japan's imports from the United States dipped in 2004 and 2005 as BSE concerns temporarily stopped the billion-dollar trade in beef. Higher grain prices, and a resumption of beef imports boosted the U.S. share in 2007 and 2008, but the beef trade has yet to regain its earlier levels. Among the major import sources, only Southeast Asia (ASEAN) has seen consistent growth in share of Japan's market in the last 5 years. Rising rubber and palm oil prices have increased ASEAN's share of Japan's market since 2001. This chart appeared in the ERS briefing room on Japan, March 2011.