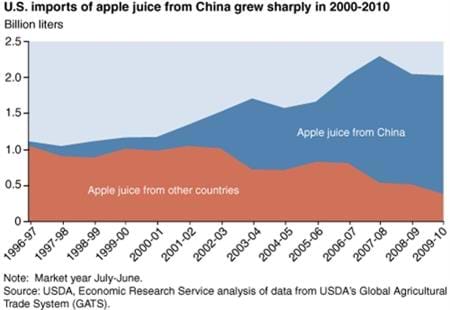 China is by far the world's largest supplier of apple juice concentrate, a key ingredient in consumer juice products and other beverages in the United States and other countries. About two-thirds of the U.S. apple juice supply now comes from China. China's prominent role in apple juice trade is remarkable, considering that its juice industry barely existed until the early 1990s. The industry emerged after market reforms in the 1980s encouraged Chinese farmers to diversify their incomes by planting apples and other horticultural crops. As production boomed, China's apple market was quickly saturated, and prices were depressed until a combination of Government, foreign, and private investment began building a juice processing industry that absorbed the glut of apples. The industry relies on exports for over 90 percent of its sales since apple juice is not traditionally part of the Chinese diet. The United States is the largest market. This chart originally appeared in the March 2011 issue of Amber Waves and is based on the ERS report, Investment in Processing Industry Turns Chinese Apples Into Juice Exports, FTS-344-01, October 2010.