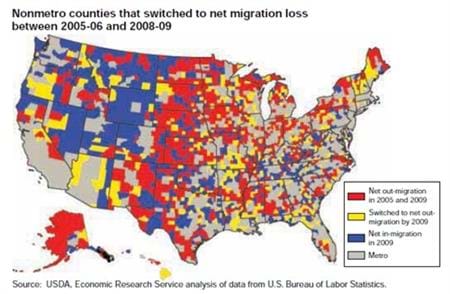 The percentage of Americans moving between counties dropped to historic lows between 2006 and 2009, reducing the rate of population growth throughout rural and small-town America, especially in areas that had previously been attracting large numbers of new residents (in-migrants). The change reflected a constellation of developments that inhibited retirement migration and other discretionary moves: a decline in wealth as home values and stock market values fell; the increased difficulty of financing home purchases in the wake of the mortgage crisis; a decline in speculative real estate construction; and falling incomes and declining job opportunities as the economy moved into recession. Between July 2008 and July 2009, the nonmetro population grew by 91,000, just a third of the population that was added during the corresponding 2005-06 period. Between 2005-06 and 2008-09, the number of nonmetro counties losing population rose from 995 to 1,123. Much of that population loss occurred in suburbanizing counties adjacent to metro areas, as well as in counties with scenic amenities. This map is found in the 2010 edition of Rural America At A Glance, EIB-68, September 2010.