Editor's Pick 2014:
California droughts are but one factor in higher retail produce prices 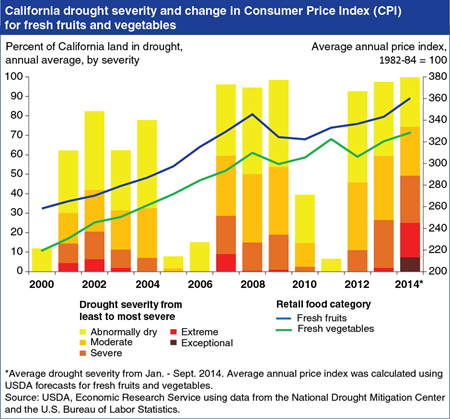 The severity and duration of the ongoing drought in California has raised concerns over its role in rising food prices at the grocery store, especially for fresh fruits and vegetables. In 2012, California produced nearly 50 percent (by value) of the nation’s vegetables and non-citrus fruit. Droughts in California are generally associated with higher retail prices for produce, but price increases are lagged due to the time it takes for weather conditions and planting decisions to alter crop production, which then influence retail prices. In 2005, following five years of drought, retail fruit prices rose 3.7 percent and retail vegetable prices increased 4 percent. Prices continued to rise in 2006, one year after drought conditions began to improve. However, other factors such as energy prices and consumer demand also affect retail produce prices. For example, prices for fresh produce fell in 2009 despite drought conditions, as the 2007-09 recession reduced foreign and domestic demand for many retail foods. As of October 2014, ERS analysts are forecasting fresh fruit prices to increase 4.5 to 5.5 percent in 2014 and vegetable prices to be 2 to 3 percent higher. This chart appears in the Food Prices and Consumers section of the 2014 California Drought page on the ERS website. Information on ERS’s food price forecasts can be found in ERS’s Food Price Outlook data product, updated October 24, 2014. Originally published Thursday October 30, 2014.