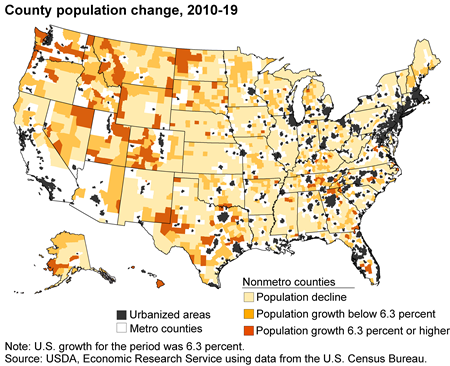 Rural (nonmetro) population loss has been relatively small—230,000 fewer people in 2019 compared with 2010—but this overall trend masks significant regional and local variation. Population declined in 1,326 rural counties—two-thirds of all rural counties. No longer concentrated in the Great Plains and Corn Belt as in previous years, declining counties are found in high numbers in most States, especially in the eastern half of the country. At the same time, 470 rural counties grew at moderate rates (below the national average of 6.3 percent). Many of these counties are located in recreation or retirement destinations, such as in the southern Appalachians and northern Rockies. The remaining 180 rural counties increased at rates above 6.3 percent. Some of the highest rates of growth during 2010-19 were seen in rural counties with booming energy sectors, such as counties in western North Dakota and west Texas. However, many energy-sector counties experienced a considerable population slowdown after 2015, in line with recent cut-backs in oil and gas production.