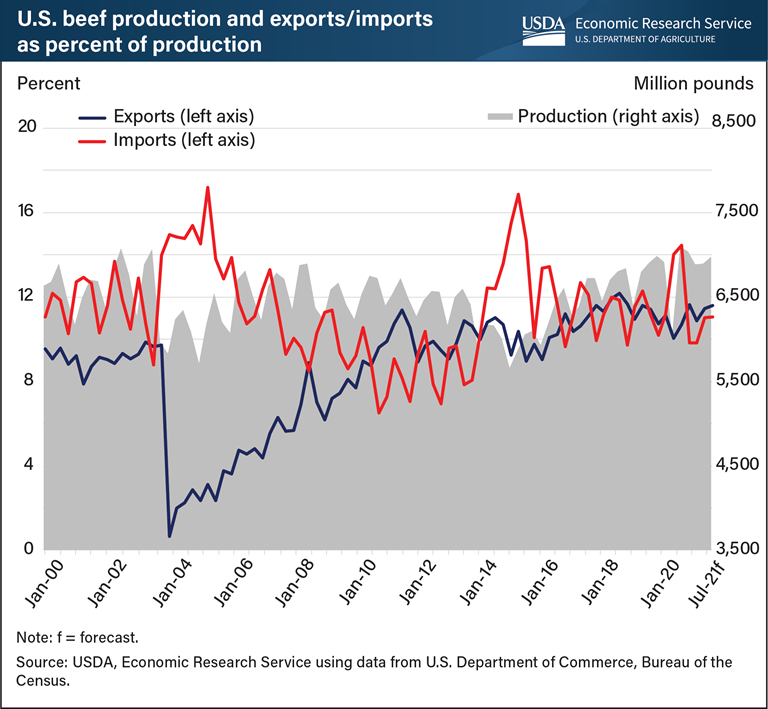 Since 2000, U.S. imports of beef have represented about 11 percent of U.S. production and exports about 9 percent. U.S. beef trade is largely dependent on domestic production, and shocks to production can lead to a boost in import demand and a reduction in supplies available for export. The 2003 discovery of bovine spongiform encephalopathy (BSE) in Canada and then in the United States disrupted beef trade in North America. As a result, U.S. imports of beef rose to record levels in 2004 and 2005. U.S. beef exports, however, plummeted as trading partners banned U.S. beef. Consequently, as trade barriers were resolved, U.S. beef exports steadily grew. In the late 2000s, drought conditions caused reductions in the U.S. cattle herd. The herd shrank to its smallest size since 1952, lowering beef production in 2014–15 to levels not seen in 20 years. In the second quarter of 2020, weekly beef production fell as much as 34 percent, compared with the same period in 2019, at facilities where operations temporarily closed or shifts were reduced as COVID-19 spread through their labor forces. In 2021, U.S. beef exports are expected to grow as a percent of production, while imports are expected to fall. This chart is based on data released in the USDA, Economic Research Service’s Livestock, Dairy, and Poultry Outlook, April 2021.