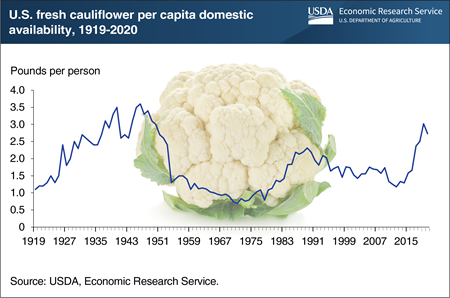 Consumer interest in cauliflower has been re-emerging in recent years. Fresh cauliflower was popular in the early 20th century, with per capita availability peaking in 1946 at a record 3.6 pounds. Its popularity rose again in the late 1970s and 1980s before falling to 1.2 pounds per capita in 2012, then began to rise, reaching 3 pounds per person in 2019. This renewed interest in cauliflower is largely based on the widespread popularity of low-carb and gluten-free dietary trends. These trends have embraced the vegetable both in fresh form and as an ingredient in a variety of products, such as pizza crusts, pastas, tortillas, and crackers. Most fresh-market cauliflower available for domestic consumption is produced in California and Arizona. Together, the two States account for 93 percent of U.S. fresh cauliflower acreage. However, as consumption of cauliflower has risen, import penetration in the U.S. fresh cauliflower market also has soared. In 2019, imports accounted for nearly 23 percent of domestic fresh-market availability, up from 13 percent in 2014. Mexico is a year-round supplier and the source for about three-fourths of annual import volume, while Canada provides most of the remainder. This chart appears in the Economic Research Service’s December 2020 Vegetables and Pulses Outlook report.