Retail food prices partially reflect farm-level commodity prices, but packaging, processing, transportation, and other marketing costs, along with competitive factors, have a greater role in determining prices on supermarket shelves and restaurant menus. Monthly price swings in grocery stores for individual food categories, as measured by the Consumer Price Index (CPI), tend to smooth out into modest yearly increases for food in general. In 2021, U.S. consumers, businesses, and government entities spent $2.12 trillion on food and beverages in grocery stores and other retailers and on away-from-home meals and snacks. 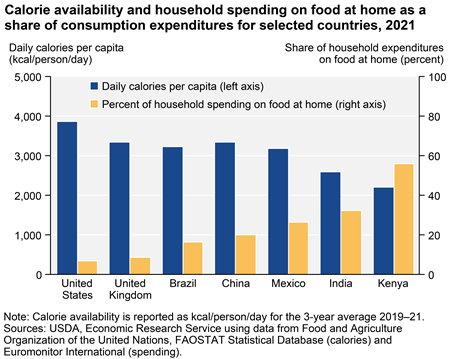 High-income countries such as the United States and the United Kingdom have higher food spending in absolute terms, but the share of household consumption expenditures devoted to at-home food is low—less than 10 percent. In Kenya and other low-income countries, at-home food’s share of consumption expenditures can exceed 50 percent. Per capita calorie availability follows the reverse pattern. According to the most recent available data, U.S. per capita calorie availability was among the highest at 3,864 calories per person per day, while Kenya’s was estimated at 2,201 calories per person per day.