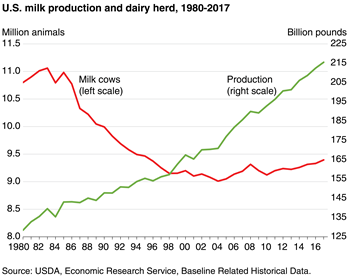 The number of milk cows in the United States generally fell in the 1980s and 1990s, but has generally risen since the early 2000s. Milk output has risen more than 67 percent since 1980 and now exceeds 215 billion pounds per year. Genetic developments and technological improvements underlie a pronounced upward trend in milk output per cow. Consolidation in the dairy sector also has facilitated efficiency gains in milk production.