Local foods represent a small but growing share of the U.S. food system—one reflection of consumers’ increasing influence on food production. Local food producers sell their goods directly to consumers at places such as farmers markets, on-farm stores, or pick-your-own stores. They also sell to retailers such as restaurants or grocery stores, institutions such as schools, universities, or hospitals, and intermediaries such as processors or wholesalers. Local and regional food systems provide significant income for many farmers, which supports rural communities, beginning farmers, and small-scale farmers. According to data from the USDA, National Agricultural Statistics Service (NASS), sales of local edible farm products in 2017 totaled $11.8 billion, or 3 percent of all agricultural sales in 2017, up from $8.7 billion in 2015.

Historically, local farmers have mostly sold their products directly to consumers in farmers markets or other dedicated outlets. As directed under the 2014 Farm Bill, NASS conducted a first-time survey to produce official benchmark data on the local food sectors in all 50 States. Researchers from the USDA, Economic Research Service (ERS) recently used data from this survey, conducted in 2016, to evaluate how local food farmers of varying levels of experience responded to an increasing demand for local food as documented in earlier studies.

An ERS report and other studies show that a higher percentage of local food sales in 2015 were through retailers, institutions, and intermediate markets, rather than directly to consumers. The survey showed most local foods were sold through intermediate markets and institutions (39 percent), followed by direct-to-consumer (34 percent) and retailers (27 percent). Researchers have found that most of the growth in local food sales has come through intermediaries, institutions, and retailers as the growing popularity of these markets has led to a plateau in direct-to-consumer sales. For example, a 2018 article in the journal Ecological Economics indicates that consumers are not willing to pay a premium for local food at farmers markets compared to grocery stores. According to the article, this is possibly because of limited product offerings at farmers markets and increases in the time and effort to fulfill grocery needs since consumers may need to shop at multiple locations. 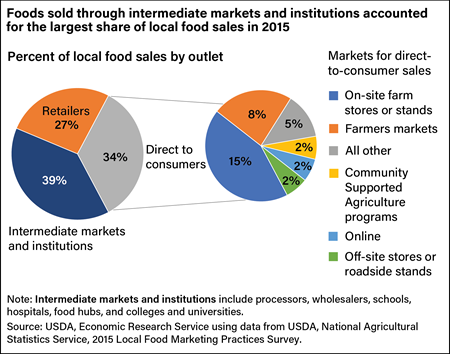