by Erik Dohlman and Matthew Miller

Each year, USDA updates and publishes the 10-year supply and demand projections for major crop and livestock commodities in its Agricultural Projections report. The projections—popularly known as the “Baseline”—account for the economic relationships that drive the outlook for U.S. and global supply, demand, and trade for major meats (beef, pork, poultry) and livestock feeds (corn, soybeans), which are key commodities to the performance of the U.S. farm sector. The projections are based on expert judgment and models that draw from a range of domestic and international data on supply and demand variables that ultimately affect the U.S. feed-livestock sector.

What is a Baseline?

The Baseline is not a forecast; it is a conditional scenario projection based on specific assumptions. A specific macroeconomic outlook for U.S. and global markets underpins the Baseline, and only policies already in place are included—and assumed to remain in place—for the duration of the projections. Also, USDA assumes average weather conditions for every year of the projections. With these and other specific conditions, the Baseline is intended as a “neutral” basis for evaluating alternative policies or market developments.

Domestic and global markets are intertwined for major livestock products and feeds. While most U.S. meat products are consumed domestically, foreign demand typically grows faster than domestic demand, and exports are an important driver of overall demand for U.S. meat products. Similarly, although U.S. livestock producers also account for much of the demand for U.S. corn and soybeans, foreign markets, as well as foreign competitors, are key in shaping market conditions for those two crops.

The United States has a strong and relatively stable domestic market for many high-value agricultural products, including meats. U.S. red meat and poultry available for consumption, for example, is projected to grow by only 1.4 percent per capita between 2020 and 2030. This does not mean, however, that the overall demand for U.S. animal products and the feeds used to produce them is similarly stable. The domestic use of corn for animal feed—called the feed and residual category—is projected to rise 19 percent between the 2020/21 and 2030/31 marketing years. Corn exports are also projected to grow 19 percent. The domestic use of soybeans, also used in animal feed formulations, is projected to increase by nearly 13 percent, and exports by 8 percent, over the same period (see first chart below). Growth in domestic feed demand for corn and soybeans is strengthened by the 12-percent increase in U.S. exports of beef, pork and poultry projected between 2020 and 2030 (see second chart below). 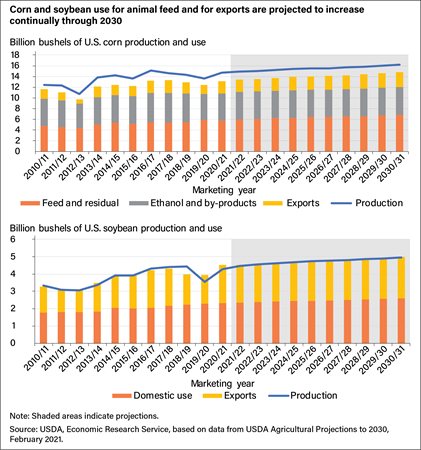 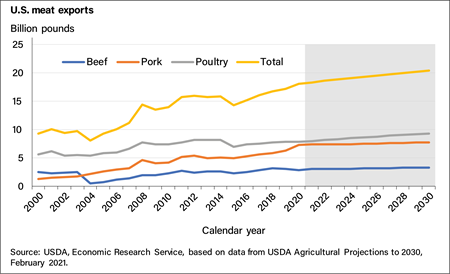 Macroeconomic Drivers of Demand for U.S. Meats and Feeds

The outlook for the U.S. and global economies, particularly for growth in real (inflation-adjusted) incomes and population, and movement in U.S. dollar exchange rates with foreign currencies are fundamental to the Baseline. They provide basic determinants of change in demand for agricultural products, including meats and feeds. It is important to account for differences in income growth and consumer behavior across global markets. For example, developing countries’ per capita incomes tend to grow faster and consumers tend to spend more of new income on improving and diversifying their diets in developing countries than in higher-income, developed country markets. Movements in exchange rates are important when evaluating the cost of imports in foreign markets and the competitiveness of U.S. products relative to other suppliers. 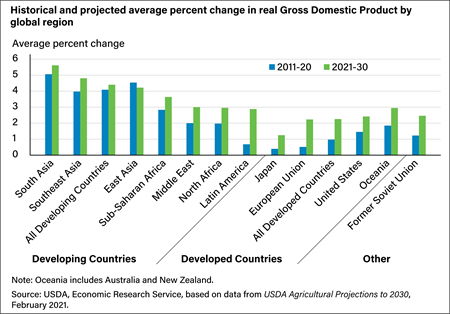 In the macroeconomic scenario behind the current USDA Baseline, the average annual change in real Gross Domestic Product (GDP)— often used to measure income growth—of every major region except East Asia is projected to increase during 2021–30 projection period compared with the previous decade (see chart above). The scenario indicates that developing regions are expected to maintain high rates of growth relative to developed countries. As a result, developing regions account for the bulk of the projected gains in global import demand for both meats and feeds. While some countries, depending on factors such as local resources, logistics, and trade policies, import feeds to support domestic meat production, others tend to import meats. Poultry meat leads the growth in world meat trade because of its relatively low cost and broad consumer acceptance relative to other meats.

How is the Baseline Used?

The annual Baseline serves several purposes inside and outside the Government. It is used to calculate projected outlays for the President’s budget released each year by the Office of Management and Budget, including spending for programs such as marketing assistance loans, and the Price Loss Coverage and Agriculture Risk Coverage programs. The projections also provide a detailed base scenario from which to evaluate the impacts of alternative policies or market conditions. Although the Baseline is recognized as a conditional long-term scenario, the projections also can be used to support planning, investment, and domestic and international marketing decisions throughout the agribusiness supply chain.