Grass Cover Crops, Such as Rye and Winter Wheat, Are the Most Common Cover Crops Used Before Planting Corn, Soybeans, and Cotton

by Maria Bowman and Steven Wallander

When choosing a cover crop, a farmer might consider a variety of factors, including the cost of the seed, the intended use (e.g., cover only, grazed, or harvested for forage), how the cover crop fits into the cash crop rotation and anticipated planting and harvest dates, and long-term management goals (e.g., to prevent soil erosion or to improve soil organic matter). Soil and climate, as well as the availability of financial assistance, are also important factors. In 2017, approximately one-third of U.S. acres that planted cover crops received a financial incentive payment from either a USDA working lands conservation program or a similar State program.

For corn fields intended for use as grain or silage in 2016, more than 90 percent of acres with cover crops used a grass or small grain cover crop, such as rye, winter wheat, or oats. ARMS did not ask farmers to report cereal rye and annual ryegrass separately, so the total rye cover crop data included both. Rye was more than twice as common as winter wheat as the cover crop used on corn fields.

By comparison, winter wheat was the most common cover crop used on cotton fields in 2015. This likely reflects both the role of wheat stubble in protecting cotton seedlings from wind and the potentially negative impact of certain chemicals produced by cereal rye on the growing cotton plant. 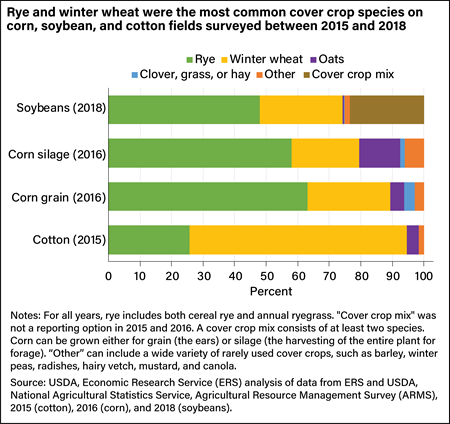